Provice 33 currencies and update their exchange rates automatically with our currency management interface. 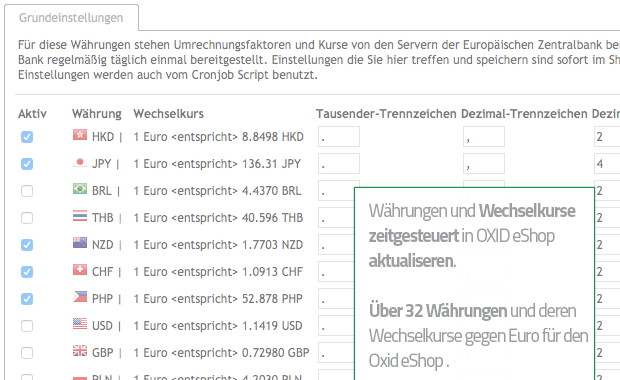 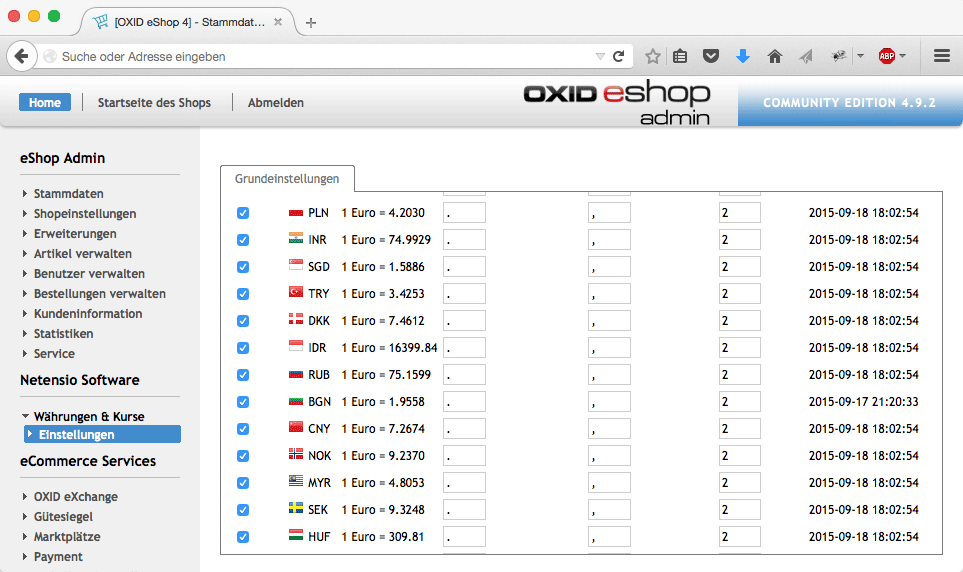 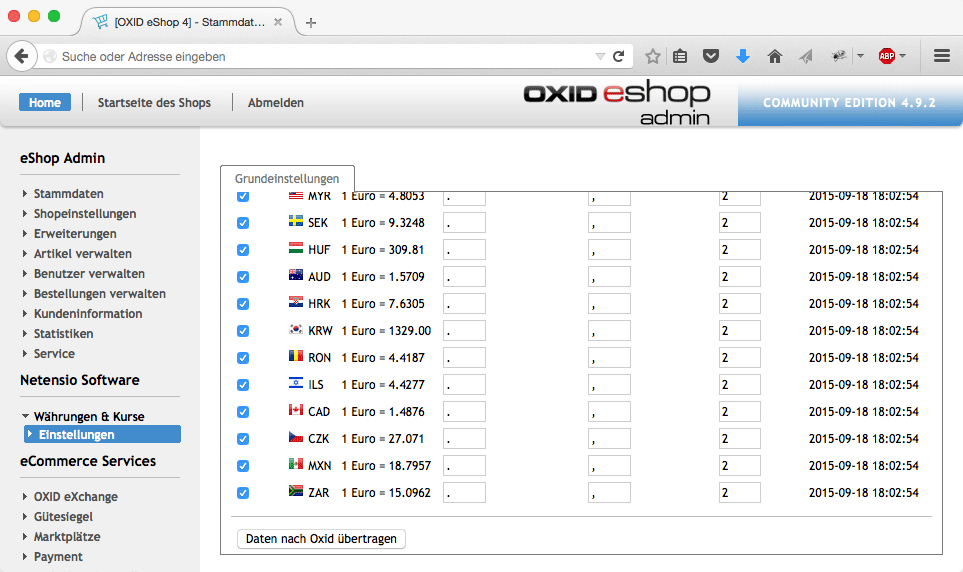 A standard feature of the OXID eShop system is to display and calculate prices in different currencies and their unique currency rates. But if it comes to rate updates and setup of the currencies, the handling gets a little bit tricky. Currency exchange rates change frequently so you have to update them manually in the standard OXID eShop solution, that can be time consuming and not precise. By lacking of automation we invented this extension to solve this issue and to update your exchange rates automatically, even more often than just on a daily basis. 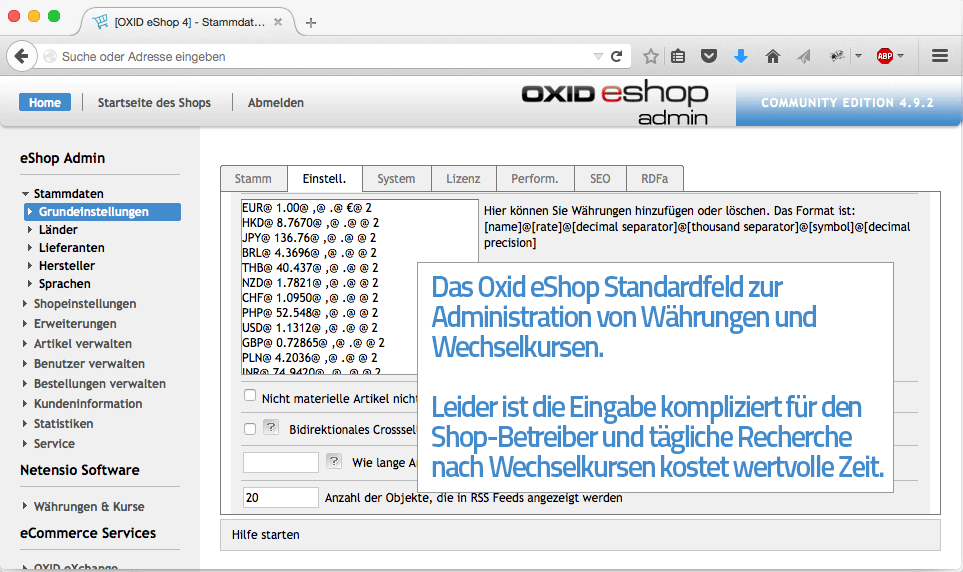 Manage your currencies using our extension 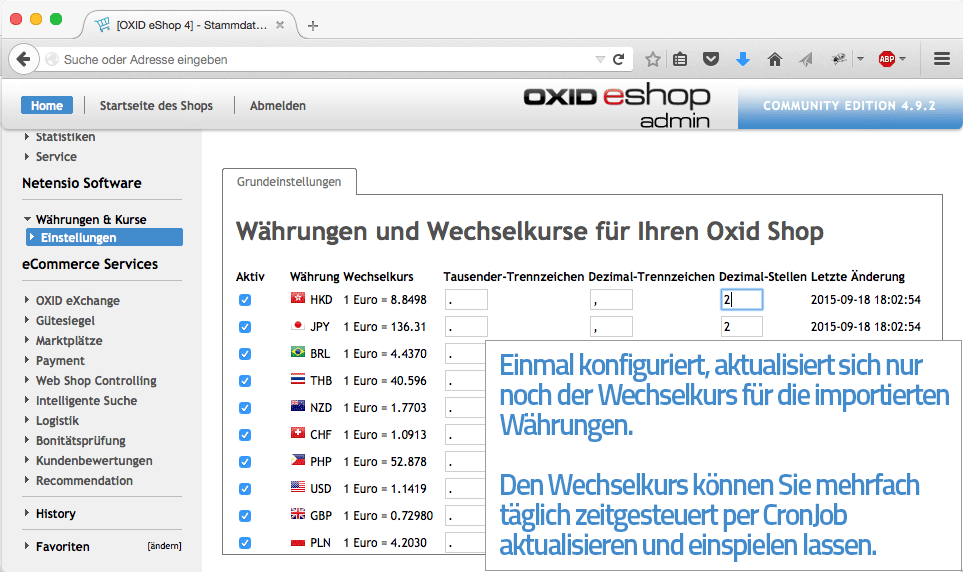 Official and up to date currency exchange rates

If it comes to currencies and their rates, the datasource and acutality of the datasource are a big matter of quality. As of this, our interface connects to the api of the european central bank, which provides the most uptodate and official currencies and rates against euro. Our interface fetches the data everytime the cronjob service triggers and everytime the administration panel gets requestet. From the administration panel you can decide wether a currency gets used, imported and held up to date. The interface can be used by all OXID eShop installations where the shops base currency is set to euro.

Can I use the software simultaneously in two or more shops?

Exactly one use per shop system is possible per licence purchased. Additional licences can be purchased at a reduced price.

Can also beginners use and install Netensio software?

Of course! Netensio attaches great importance to intuitive user control and easy to use software. If you should not know nevertheless once further, we help you on our numerous information pages gladly. In addition, every Netensio software comes with an installation and user manual in Adobe PDF format.

All Netensio 30 days trial versions which you buy in the official online shop on Netensio.de are absolutely free of charge. The provision takes place as download. Depending on the network operator costs for the download transfer can arise, these you take please from your contract documents. If you should use a volume tariff, the expected file size of the download package is next to the download button of the module.

No, absolutely not! Netensio develops software modular - that means we overlay and extend the existing shop functionality without changing the Oxid eShop file structure. By using our software you can also install Oxid updates without problems, the Netensio software remains unaffected.

How do I license my purchased test version / full version?

After you have completed the ordering process, you can access the license administration via your personal user account. In the license management all Netensio software licenses purchased with your user account are listed. If you have not created a license file yet, you can generate a license file for the respective order here. Please note that for creating full versions, the payment of the order must be confirmed by us. With payment methods such as Paypal you get immediate access to your software license.
Back to top