Do you need help?

Do you need help with software you already bought from Netensio?
File your support requests, questions and bookings of installation services to our service team which will surely be able to help you.

Do you need help with an existing order?
Check the status of your order in your personal account order history overview and be sure to donwload your ordered items before the donwload link expires.

On the evening of May 2, 2017, the Stuttgart OXID eShop Usergroup met for its third meeting. This time Verdure GmbH invited to a barbecue over the roofs of Stuttgart's valley basin. Unfortunately, the weather did not allow us to do so and the popular pizza service remained. A colourful mix of OXID eShop developers, SEO's and agency owners attended the meeting. Marco Steinhäuser as Community Manager of OXID eSales, took the long train ride from Leipzig to Stuttgart and guided us through the evening.

Besides topics such as the current three-step rollout of OXID eShop version 6, which is currently starting for OXID eShop partner agencies, questions about SEO plug-ins and the use of GRUNT as TaskRunner in connection with the current OXID eShop template "Flow" were addressed.

It was noticed that some GRUNT are actually used to optimize recurring tasks before or during the deployment of OXID eShop, but the exact areas of application are chosen very differently. Although for the miniaturization of scripts or the reduction of HTTP requests by systematically merging files, up to the complete optimization of generated shop images, almost every application was represented.

All in all, the third Usergroup meeting in Stuttgart was an enrichment and we are looking forward to numerous further meetings. 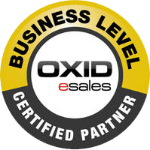 You have an individual request?

Lets discuss your goals and ideas and find a strategy to achieve them together.